What skin type do I have?

Several factors can impact your risk of developing skin cancer, one of them being your skin type. SkinVision helps you identify your skin type to learn the most effective ways to protect yourself from skin cancer and receive personalised advice, assessment and care.

Based on your Skin Type and Risk Profile, in case of Risk or High Risk Assessment, SkinVision will provide you with a personalised skin health journey, guiding you and staying with you through the process before and after your visit to the doctor.

How to do that?

Open the SkinVision app and fill in the questionnaire to find out your skin type and risk profile.

* The Fitzpatrick scale is used by dermatologists as a numerical classification for human skin colour and how it responds to the sun.

Open the SkinVision app and fill in the questionnaire to find out your skin type and risk profile. 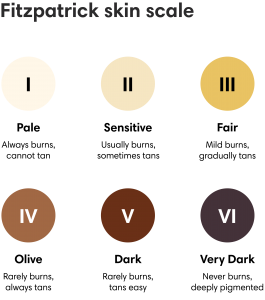 *The Fitzpatrick scale is used by dermatologists as a numerical classification for human skin colour and how it responds to the sun.

Are all spots and moles created equal?

While for many of us moles are just brown spots on our body we may not pay much attention to, they come in various shapes, sizes, and forms that can tell us important things about our skin health. Understanding all types of skin moles helps us identify any suspicious signs of skin cancer and keep our skin healthy. Want to check if your skin spots are safe or pose a risk at your health? Better and much more accurate than comparing images you browse online, use SkinVision to check your skin for signs of skin cancer and get an instant risk indication.

First of all, what is a mole?

A mole or nevus is a dark spot on our skin comprising skin cells that have grown in a group rather than individually. These cells are called melanocytes and are responsible for producing melanin, the pigment (colour) in our skin. Moles appear on our skin through sun exposure (ultraviolet radiation), or we are born with them. Although the number of moles varies from person to person, fair-skinned people generally have more moles due to lower amounts of melanin in their skin. The average number of moles for adults is between 10 and 40. Moles can even come and go with hormonal changes such as pregnancy or puberty. Most people develop more moles on their skin naturally with age and sun exposure, and most of the time these are harmless. However, we need to conduct skin checks regularly (recommended monthly, especially if there is a family history of skin cancer, or at least every three months) to check whether they have changed.

What types of skin moles are there?

Not all moles are created equal. Here’s a quick guide to mole types and how they affect your skin. We categorised moles based on time of development, placement on the skin, and typical or atypical symptoms. Based on this categorisation, moles can be described by multiple classifications. For example, you may have a common acquired junctional nevus or an atypical congenital nevus.

Common
A common mole is usually about 5-6 mm large, has distinct edges, a smooth, dome-like surface, and pigmentation. Common moles are found on skin regularly exposed to the sun and can potentially but rarely turn into skin cancer.

Atypical
Atypical moles, or dysplastic nevi, are moles that exhibit irregular symptoms. They usually have fuzzy or blurry borders, vary in colour, are larger than most moles, and have both flat and raised components. While dysplastic nevi share a lot of the same signs of precancerous or cancerous moles, most dysplastic nevi are benign. However, a person with many dysplastic nevi has an increased risk for skin cancer. Regular self-examinations are important to detect changes in these types of moles.

Congenital
Congenital moles, also known as congenital nevi, are moles that appear at birth or within the first year of a baby’s life. They are caused by melanocyte cells in the dermis (middle layer of skin), epidermis (outer layer of skin), or both. These types of moles can range in size and are sometimes referred to as birthmarks. Congenital nevi poses some risk of developing into melanoma later in life and should be monitored as you enter adolescence and adulthood.

Acquired
Acquired moles are moles that appear during childhood and adulthood. Most of these moles are benign and pose no risk, although sometimes they can turn into cancerous moles with age. This type of mole is the most common and is usually caused by repeated sun exposure.

Junctional Melanocytic Nevi
Junctional melanocytic nevi are moles that occur from an accumulation of melanocytes where the dermis and epidermis meet. These moles are typically slightly raised with regular borders and dark pigmentation, although they can range in colour from tan to dark brown. People usually acquire these moles between childhood and early adulthood, because, as we age, it is common for melanocytes to migrate down to deeper layers of the skin.

Intradermal Nevi
Intradermal nevi are skin-coloured moles that often blend in with your surrounding skin. Their pigmentation is not as dark as junctional melanocytic nevi because they are located in the dermis or the middle layer of your skin. These moles usually develop in late childhood or throughout adulthood and are very common and usually benign.

Compound Nevi
Compound nevi show signs of both intradermal and junctional nevi, with melanocyte cells located in the dermis and dermo-epidermis junction. These moles usually have a central raised area with flat areas around the edges. They usually have distinct borders and even pigmentation.

Halo Nevi
Halo nevi are raised moles surrounded by a ring of skin that has lost pigmentation due to inflammatory infiltrating cells. Doctors are still trying to understand why this reaction occurs, but if appropriately diagnosed, these moles are benign and require no treatment unless for cosmetic reasons.

How can I tell whether my mole is safe?

Moles that are considered ‘safe’, or not at risk for cancer, generally have a few common features. They usually resemble common moles and:

· have neat edges,
· are smooth or dome-shaped,
· are around ¼ inch (6mm) in diameter,
· preserve the same shape, size or colour over time.
It is important to make an ‘inventory’ of your moles to identify any changes that might occur over time. Understanding what is normal for your body is key to the identification of early skin cancer symptoms and in-time treatment.

What are the warning signs that it may be cancerous?

Look for these indicators that your mole may be cancerous:

Do the ABCDE checklist

Professionals often use this helpful checklist when advising patients on what to look for in relation to melanoma detection.

What is skin cancer and what causes it?

Cases of skin cancer have been on the rise for decades now. When detected early, most skin cancer types can be treated. That’s why it is important to check your skin regularly for any irregularities and see a doctor whenever you are concerned about something.

While melanoma is the most dangerous form, it is still important to pay attention to non-melanoma skin cancers and understand the various ways in which they manifest.

Skin cancer is caused by a mutation in the DNA of skin cells. But what causes this mutation? In most cases, the answer is UV exposure from the sun. Both ‘normal’ day-to-day exposure when outside, and also from actively trying to tan. But it often appears in places that are usually hidden from direct sunlight, so there are other factors in play. Studies have shown that exposure to toxics can be a cause, for example from the environment you live in. Also, genetics can be a cause of skin cancer.

Seonaid Sichel
United Kingdom
I had a lesion come up, small and pink, like a pimple. Didn’t think much of it but as it was new, I used SkinVision on it and got a red rating. This was enough to make me concerned, but I decided to see my doctor when an email from the SkinVision team urged me to do so.

Spots to keep an eye on

As a rule of thumb, moles that stand out from the others – the so-called ‘ugly ducklings’ – need to be checked. They could be asymmetrical, have a border, show multiple colours, are bigger than others, or are changing over time.
More about your moles

Small red spots are most common and are usually cases of ‘blood spots’ (petechiae) or an allergic reaction. In rare cases, more dangerous causes may be found. If you feel uncomfortable, self-check as a first step.
More about red spots

The most common white spots are ‘Idiopathic guttate hypomelanosis’. These white spots on the skin are usually caused by sun exposure. In the case of too much UV exposure, the skin cells can change in colour.

Asymmetry
Moles that are not small and round could be showing symptoms that there is a risk. Imagine splitting a mole in half; if both sides are not identical, you should make sure to check the mole for skin cancer risk.

Border or color
Do you see a border around the mole or lesion? This is not natural growth, and that mole should be checked out. Also if you see any colours other than brown/light brown, it deserves attention.

Evolution
Moles that change over time are a cause for concern. This ‘evolution’ of a mole is not natural, and you should keep a close watch on it. If you notice any changes, go see your doctor.

Where does skin cancer appear most often?

Skin cancer can appear anywhere on the skin, but there are a few places where skin cancer occurs more frequently. This has to do with several factors, such as your gender, genetics and the amount of sun exposure on a certain area. As you can see, some of these places might be hard to check for yourself. You can use the help of a partner or friend if needed.